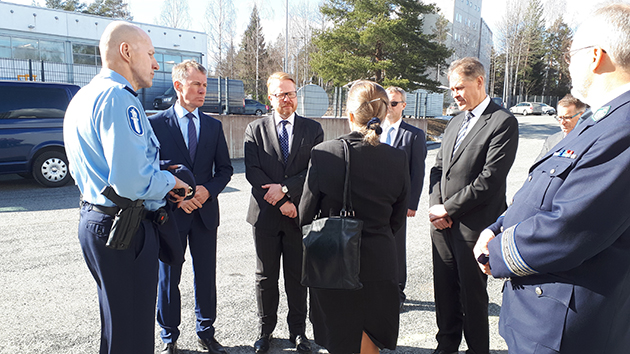 Permanent Secretary Ilkka Salmi and Alexander Gorovoy, First Deputy Minister of the Interior of the Russian Federation, met in Tampere on 2–3 April. This a was Deputy Minister Gorovoy’s first visit to Finland.

The visit was a follow-up to the two-year cooperation programme signed by the Finnish and Russian Ministers of the Interior, by which they also agreed on arranging high-level meetings on an annual basis. The meeting in Tampere was the first ministerial or deputy ministerial meeting under the programme.

The main themes of the visit were police and migration issues. Deputy Minister Gorovoy visited the Police University College in Tampere and observed an operational exercise that is part of the students’ degree programme. Also on the agenda was a visit to a reception centre for asylum seekers.

The Finnish participants learned about the security arrangements of the 2018 FIFA World Cup in Russia, led by Deputy Minister of the Interior on behalf of the Ministry of the Interior of the Russian Federation. The Russian authorities saw to the safety and security of 64 football matches, about three million spectators, tens of heads of state or government, thousands of journalists, and numerous football teams.

"I was impressed to hear about the scale of cooperation among different authorities when it is a question of a sports event of such magnitude. It was a true masterpiece of a collaborative effort between public authorities", Permanent Secretary Ilkka Salmi points out.

Salmi and Gorovoy also talked about cooperation to combat drug-related crime and how this could be further deepened. Besides these, the items on the agenda included legal migration, overall picture with regard to illegal entry into both countries, and Russia’s state migration policy concept for 2019–2025.

One of the starting points for the new migration concept is the fact that demographic development in Russia will lead to a shortage of labour in the future.

"We noted that in this respect the trend is the same in both countries. In future we must put even more emphasis on work-based migration", Ilkka Salmi sums up the discussions.