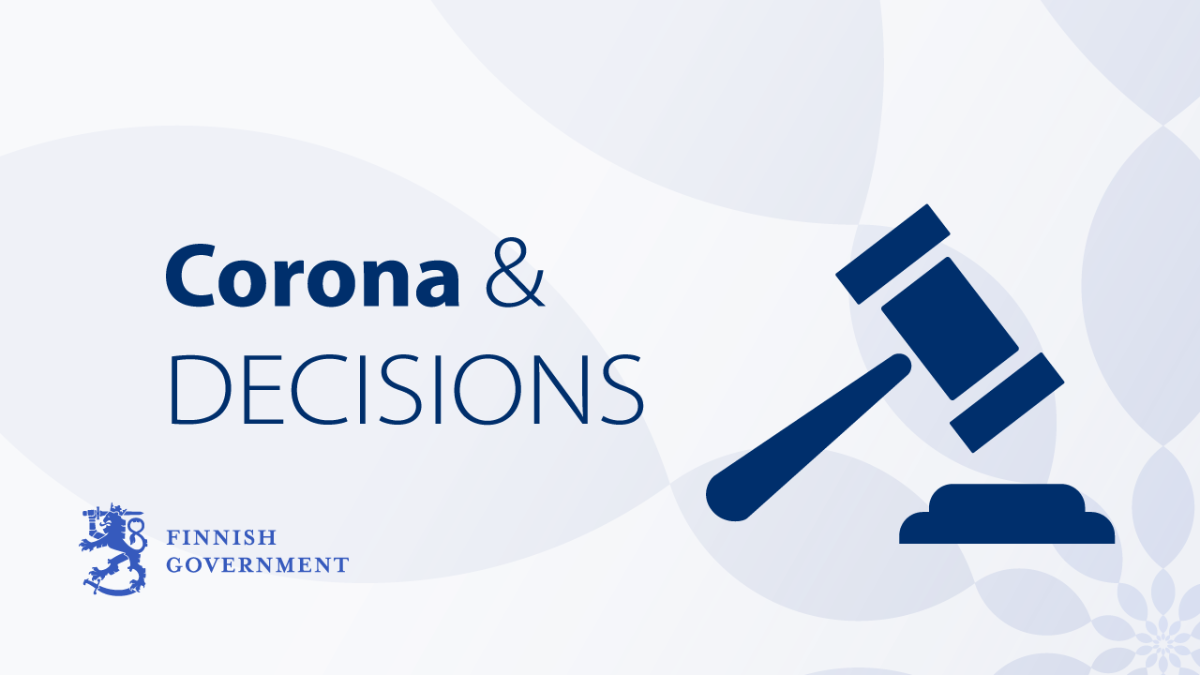 On 11 September, the Government adopted a decision on restrictions on border traffic, which will enter into force on 19 September and continue until 18 October. Restrictions on entry will be lifted for traffic between Finland and Cyprus, Germany, Iceland, Liechtenstein, Norway, Poland and Sweden, as well as for residents of Australia, Canada and Japan who are travelling from their home country to Finland. Restrictions on entry into the country will be reintroduced between Finland and Italy and Hungary.

The lifting of restrictions means that recreational travel to Finland is permitted for people from these countries. In addition, travellers will not need to self-isolate upon their arrival in Finland.

Similarly, when entry into the country is restricted, recreational travel to Finland from the countries concerned is not allowed. If a person enters Finland for another authorised reason, they should self-isolate for two weeks. People arriving in the country may also be directed to a voluntary COVID-19 test at an airport or port. Based on a risk assessment, the doctor may place the person in quarantine.

Internal border control to continue until 22 November, transitional model in force from 1 October

According to the Schengen Borders Code, internal border control between the Schengen countries should not, as a rule, be continued beyond a maximum period of six months. However, it is possible to make justified exceptions to this. In Finland, the six-month period will end on 18 September. The Government has decided that, in order to fight the second wave of the COVID-19 epidemic, Finland will continue to impose country-specific restrictions on entry at its internal borders from 19 September to 18 October 2020.

Alongside restrictions on entry, transitional procedures will be introduced on 1 October. During the transition period, prior testing is recommended for persons arriving from EU and Schengen countries subject to internal border control, for those arriving from the EU's Green List countries with a higher incidence and for those arriving from third countries for essential reasons. If they so wish, residents of Finland returning from countries with higher incidence rates can shorten their period of self-isolation by taking a test as soon as they arrive in Finland, followed by a second test after 72 hours at the earliest. This will ease the conditions for essential travel for work.

Changes to the limit value for the incidence of COVID-19

From 19 September, restrictions on entry may be lifted for traffic between Finland and those EU and Schengen countries where the incidence of new cases has not exceeded 25 new cases per 100,000 persons in the previous 14 days. Until now, the limit value has been 8–10. The new limit value also applies to the United Kingdom.

The limit value of 25 new cases per 100,000 persons in the previous 14 days will also apply to the countries on the Green List defined by the Council of the European Union.

Internal border traffic refers to traffic between Finland and other Schengen countries. Starting from 19 September, entry into Finland from Iceland, Germany, Liechtenstein, Norway, Poland and Sweden will no longer be restricted. Entry into the country has already been permitted for residents of the local border community on the land border with Sweden and Norway. There are also no restrictions on entry between Finland and Estonia, Latvia, Lithuania and Slovakia.

As a result of the Government’s decision, restrictions on internal border traffic will remain in force until 18 October 2020 for traffic between Finland and Austria, Belgium, the Czech Republic, Denmark, France, Greece, Hungary, Italy, Luxembourg, Malta, the Netherlands, Portugal, Slovenia, Spain and Switzerland, with the exception of leisure boating. In all of these countries, the incidence of outbreaks exceeds the limit value of 25. The list of countries will be reviewed on a weekly basis and updated as necessary.

At the internal borders, restrictions on entry only allow return traffic to Finland, transit traffic, work-related travel and travel for other essential reasons. In addition, a 14-day period of self-isolation is recommended for travellers arriving in Finland.

External border traffic refers to traffic between Finland and non-Schengen countries. Restrictions on external border traffic will be lifted from 19 September for traffic arriving in Finland from Cyprus and for residents of Australia, Canada and Japan travelling from their home country to Finland. Restrictions have already been lifted for traffic between Finland and Georgia, New Zealand, Rwanda, South Korea, Thailand, Tunisia and Uruguay for residents of these countries, and the Vatican..

For all other non-Schengen countries, restrictions continue to be in force until 18 October. This applies, for example, to the United States, Russia, China and Ireland. The list of countries will be reviewed on a weekly basis and updated as necessary. At the external borders, restrictions on entry only allow return traffic to Finland and other EU and Schengen countries, transit traffic at Helsinki Airport and other essential traffic. In addition, a 14-day period of self-isolation is recommended for travellers arriving in Finland.

Under section 9 of the Constitution of Finland, Finnish citizens always have the right to return to Finland, and everyone has the right to leave Finland if they so wish, provided that there is no legal impediment to this. However, the Government still recommends avoiding unnecessary travel.

Self-isolation is still recommended for all those arriving in Finland who come from countries that are subject to restrictions on entry. According to the guidelines of the Finnish Institute for Health and Welfare, it is not recommended to go to a workplace, day care centre or school during the 14-day period of self-isolation. Essential travel is possible. In this case, it is recommended to wear a face covering or a face mask. Travellers arriving in the country will be given instructions on how to proceed.

Travellers must be aware of the current entry and quarantine regulations of their country of destination and they must take into account the quarantine recommendations for those returning to Finland. Travellers must find out themselves what their travel insurance covers in the event of a pandemic. Each traveller should check the current instructions:

The press release was corrected 11.9.:  Liechtenstein and the Vatican were added to the lists.

Inquiries from the public about border traffic

Questions about quarantine and testing: Finnish Institute for Health and Welfare, Ministry of Social Affairs and Health