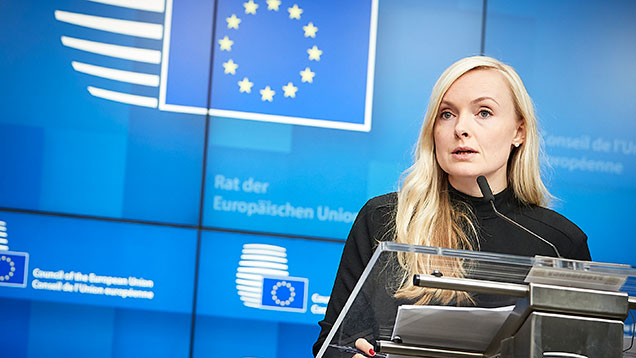 On 8 October, Minister of the Interior Maria Ohisalo will attend an informal meeting of the EU home affairs ministers via video conference. The main theme of the meeting will be the reform of the EU migration and asylum policy. The ministers will now have their first discussion about the reform and the way forward. No decisions will be made at the informal meeting.

On 23 September, the European Commission issued a comprehensive communication on the reform of migration and asylum policy, which sets the direction for the current legislative term. The communication was accompanied by legislative proposals.

"With its wide range of tools and strong international role, the EU is better equipped to find solutions for migration than any Member State alone. The Schengen area of free movement also ties the Member States together. That is why it is necessary to establish a common migration and asylum policy in the EU," Minister Maria Ohisalo says.

"Finland is committed to common European solutions for the development of migration and asylum policy, and is ready for open and flexible discussions seeking compromises on the basis of the Commission proposals. Of course, both national and EU action must respect the obligations of international law and fundamental and human rights."

The reform seeks solutions in particular to those problems of the common asylum system on which the Member States’ opinions are divided. However, the development of asylum policy will continue to a large extent on the basis of the agreement reached in the negotiations over the past few years.

"The most difficult questions at EU level relate to the sharing of responsibility and solidarity between the Member States. From Finland's point of view, responsibility-sharing must be fair and sustainable so that all Member States are able to meet their legal obligations in normal conditions. We must also create effective mechanisms for migratory pressures and different types of emergencies," Minister Ohisalo says.

In addition to the reform of the asylum system, the Commission communication covers, among other things, return policy, cooperation with non-EU countries and the development of legal migration pathways. The communication also deals with reinforcing border management and combating migrant smuggling.

Other topics of the meeting: migration cooperation and the European Police Partnership

At the meeting, Germany, which currently holds the Presidency of the Council of the EU, and the Commission will present migration cooperation with the countries of North Africa and the Western Balkans. This cooperation includes the fight against migrant smuggling and further development of border management.

Ministers will also continue the discussion on the European Police Partnership, which involves ensuring an effective exchange of information in particular.