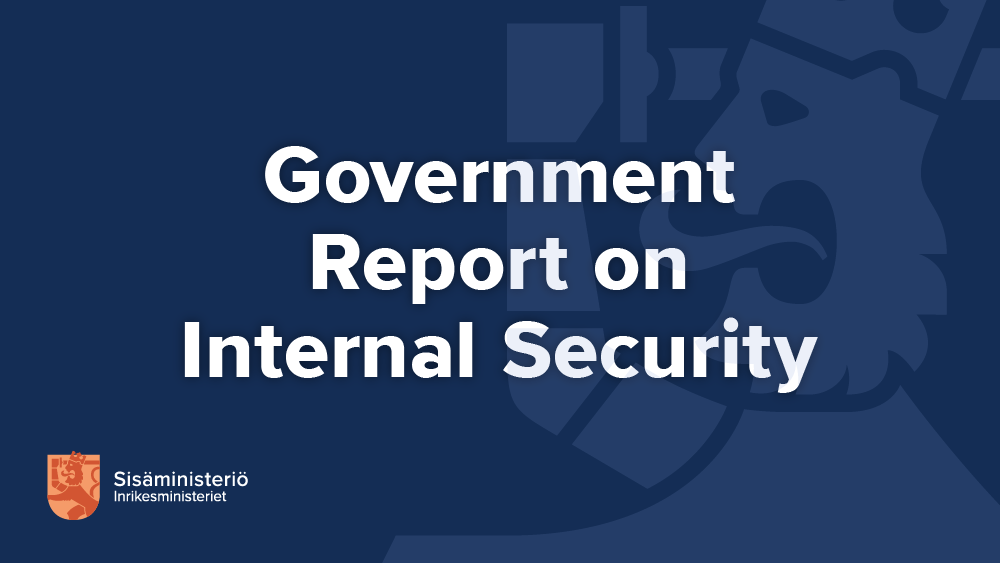 On Thursday 20 May, the Government adopted the Report on Internal Security and submitted it to Parliament for consideration. The objective of the Report is that Finland will be an even safer country for all people and population groups in the future.

The Report on Internal Security assesses the state of internal security in Finland and the national and global drivers of change affecting it, and it defines the internal security objectives and the direction of development until 2030.

The drivers of change that are affecting Finland's internal security, such as inequality and marginalisation, population ageing and polarisation, will increase without active actions and policies. Cyber-facilitated crime and cybercrime are increasing and developing rapidly. Global challenges such as climate change, biodiversity loss, migration and pandemics can cause inequality, bring on lack of prospects and deepen dividing lines.

According to a survey [1], 96 per cent of Finns feel that their lives are safe. What kind of security problems a person faces in everyday life strongly depends on their personal situation, circumstances or experiences.

“Marginalisation, social unease and multiple deprivation are still the biggest threats to Finland's internal security. Action is needed from society as a whole to combat these. The key objective of internal and external security measures is to safeguard fundamental and human rights for everyone”, says Minister of the Interior Maria Ohisalo.

The Report on Internal Security aims to ensure the further development of internal security so that Finland will be an even safer country for all people and population groups in the future.

This objective will be implemented for example by

-    shifting the focus of the authorities' activities from corrective services to prevention,
-    maintaining a high level of trust in internal security operators among all population groups and
-    ensuring that assistance is quickly available in emergencies throughout the country.

“A strong feeling of safety and security in everyday life also assists in tackling crises. The root causes of security problems must also be effectively addressed through wide-ranging cooperation and by actions other than those of the security authorities. We need to prevent multi-generational deprivation and, in particular, strengthen the sense of security of the underprivileged. This will help the most vulnerable in our society feel safer and more secure, and this will also strengthen the security of society more broadly”, says Minister Ohisalo.

Equal and accessible services throughout the country

People must have access to the services provided by security and judicial authorities so that they get the help they need across the country quickly, efficiently and equally. Services reduce inequalities in security between groups of people. This requires adequate staff and equipment and effective cooperation between different authorities.

Additionally, the Report examines the development of internal security in relation to how Finnish society is expected to change as part of Europe and the international community. The Report looks to the future until 2030. Various ministries and authorities were involved in the preparation of the Report and other parties were widely consulted. The Government Report on Finnish Foreign and Security Policy and the Government Defence Policy Report that is currently being prepared were also taken into account in the preparation.