Don’t spread hate when you communicate!
The campaign run by the Ministry of the Interior and the police encourages young people to think about the culture of discussion on social media and the impacts of hate speech

Ministry of Education and CultureMinistry of the InteriorNational Police Board of Finland
7.10.2020 10.00
Press release 118/2020 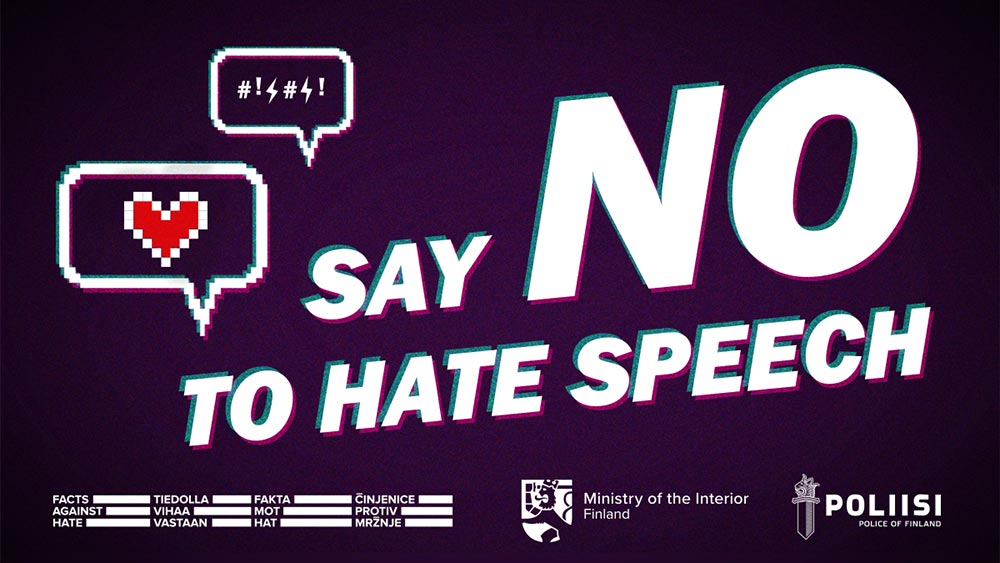 The Ministry of the Interior and the National Police Board have launched a new social media campaign for young people that aims to encourage them to think about the way we use social media to discuss issues and the impacts of hate speech in their surroundings and in society as a whole.

“Human interaction focuses on online platforms, especially during the coronavirus pandemic. Social media platforms bring us closer together, but the downside is that hate also spreads through them. We want to encourage young people and everyone else as well to think about how we use these platforms. Do we use the same language online as we would if the person were standing in front of us? The same rules apply online as face to face,” says Minister of the Interior Ohisalo.

“Since bullying and hate speech are spreading more and more on online platforms as well, it is important that young people can identify situations that cause concern and that they can seek support. Adults also need to understand the impacts of online hate speech,” says Minister of Education Andersson.

Hate speech is a growing problem According to the hate crime report published by the Police University College on 7 October, verbal insults, threats and harassment are increasing. Ethnic agitation, for example, has tripled in crime statistics. The statistics provided by the authorities do not, however, include all hate speech since the authorities are aware of only a fraction of all cases.

“Even though all hate speech may be harmful, it is the duty of the police to specifically investigate punishable hate speech, i.e. hate speech that meets the description of an offence,” says National Police Commissioner Seppo Kolehmainen.

“Constructive criticism is always welcome and the police do not restrict free speech. However, freedom of speech comes with responsibility. The police intervenes actively when the threshold for punishable action is exceeded.”

In 2016, the Ministry of Justice investigated hate speech and harassment against minorities, such as the Roma, immigrants, disabled people or sexual minorities. The most common forms of hate speech or harassment were verbal insults, hate speech, humiliation or name-calling. According to the respondents, the biggest impacts of hate speech were on their feelings of security and mental health, but it also affected their trust in the authorities.

Hate speech is a threat to democracy

Hate speech reduces safety and the feeling of security and causes a threat to democracy. It erodes trust in other people, the authorities and the legal system. According to a survey published last year, a small proportion of decision-makers in society encounter hate speech, but hate speech has a more general effect on the willingness to contribute (Viha vallassa, 2019).

“It is not that no one should be criticised anymore. Free speech and an open Finnish society include even strong criticism, especially of politicians. It starts going wrong when a person or someone close to them is threatened, defamed or pressured. You must be able to express your opinion without violating the rights of other people,” Minister Ohisalo points out.

The campaign is running on Instagram, and it has received EU funding. The social media campaign against hate speech aimed at young people is a part of the Facts against Hate project initiated by the Ministry of Justice, intended to make the work against hate crimes and hate speech more effective. The project is funded by the European Union’s Rights, Equality and Citizenship Programme.