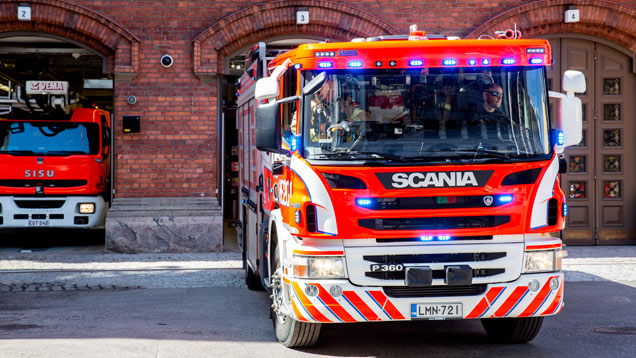 The Fire Protection Fund’s innovation award for 2019 was shared between Senior Research Scientist Marko Hassinen for developing a detection scope for extinguishing fires and Firefighter Kalle Kuparinen for a wall support used for firefighting and clearance work.

The detection scope for extinguishing fires makes it possible to fight fires from outside a building and exposes firefighters to less risk related to firefighting. The wall support improves the occupational safety of rescue personnel and makes the use of the ladder fleet more diverse.

The winners of the innovation award were announced on Thursday 21 November in the rescue services’ theme days in Joensuu. The total amount of the award is EUR 20,000, of which each winner received EUR 10,000.

The detection scope developed by Marko Hassinen makes it possible to inspect externally the site being extinguished and to locate where the fire started from and to search for any people in the site that need to be rescued.

During the inspection of the site, a small hole is made into the wall of a building or a door or window frame. The detection scope has an observer part that is pushed through the hole into the burning space. Hassinen has built the device himself and programmed an application for moving the detection scope. The application works in a mobile device, so its use does not tie up personnel resources. The head of the device rotates freely in the site, which means that it is possible to inspect the whole room by observation.

"Since it is possible to extinguish fires from outside the building, people are far less likely to be exposed to flue gases and heat. Moreover, the detection scope improves occupational safety. You don’t need to go inside the burning space until it has cooled down and been ventilated", says Hassinen.

There is a thermal camera at the tip of the detection scope that transmits pictures of the burning site to the terminal equipment used by the firefighter. The camera can be used to target the water for extinguishing right at the seats of fire and combustion gases. Only verified hot sites on the premises are extinguished with water. This way, the water used in the space evaporates, extinguishing the fire more effectively. As a result, there is much less water damage to the site and the amount of water used for extinguishing fires, which is recognised to be a problem to the environment, is smaller.

"The best thing about the detection scope is that you only need a few people to start extinguishing the fire. With the scope, even just one firefighter can fight the fire effectively and doesn’t even need to be a qualified rescue diver," says Hassinen.

The innovation also improves fire safety in sparsely populated areas, because it is possible to start fighting the fire safely as soon as the first unit arrives at the site.

The wall support developed by Kalle Kuparinen consists of an additional component that can be attached to the ladder fleet. The wall support makes it safer to work on ladders and ladders used by rescue services can be used in more versatile ways. The support does not require major investments or structural changes to ladders, as it is suitable for the existing ladder fleet. Since it is small, the wall support takes very little space in rescue vehicles.

"The best thing about the wall support is that it is easy to use. It's made of aluminium, which makes it light. It clicks fast into place on the ladder. The product is designed to meet the needs of the users," says Kalle Kuparinen.

This innovation allows rescue workers to adjust the distance between the ladder and the wall so that it makes it easier to work. This means that the angle is less steep, which makes the position of the ladder more stable and gives the rescue workers more space to work with their hands. When the working position is better and firmer, there is less risk of falling and occupational safety is improved.

"The idea of the invention was to develop a solution to make better use of the fire extinguisher. Thanks to the tips received along the way, we were able to make it more adaptable to a wide range of rescue and clearance operations. Now I hope a suitable company will start manufacturing the wall support for fire brigades", says Kuparinen.

What is the innovation award of the Fire Protection Fund

The innovation award of the Fire Protection Fund aims to encourage companies, organisations, rescue personnel and individuals to develop new, more efficient and safer equipment, procedures and working methods. It also strives to improve the visibility and esteem of the rescue services in society. The award may be granted for an innovation developed by companies, organisations or individuals that has significantly contributed to these objectives. The innovation can be a device, tool or machine, work method, mode of operation or any other similar new invention.