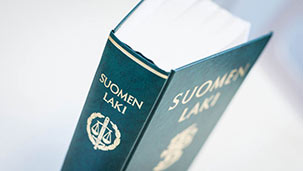 A working group chaired by the Ministry of the Interior has assessed legislation falling within the purview of the Ministry and the need for amendments to prepare for hybrid influencing that exploits migration. The study suggests that practical amendments for responding to hybrid influencing and managing situations could be made to the Aliens Act, the Act on the Reception of Persons Applying for International Protection and on the Identification of and Assistance to Victims of Trafficking in Human Beings and the Border Guard Act. The working group proposes a more detailed study of legislative amendments and an assessment of their impact.

The amendments relate to the asylum procedure and maintenance of border security.

The report only examines legislation governing normal conditions, in which powers related to disruption of normal conditions should be enacted as a matter of priority. Additional powers to be deployed in a state of emergency are laid down in the Emergency Powers Act. A reform process in this area has been initiated at the Ministry of Justice.

The border procedure also essentially involves the return of individuals who have received a negative asylum decision. Practical returns and return policies must be developed at both national and EU level in partnership with third countries. The report highlights the need to promote a voluntary return support system as a need for legislative change.

Increased opportunities for accelerated asylum procedures and registration of applications

Finland already applies an accelerated asylum procedure. This means that applicants in certain situations have no automatic right to remain in a Member State pending the outcome of any appeal procedure. The report suggests that the accelerated procedure could also examine applications from individuals who may, on serious grounds, be considered to pose a threat to national security or public order in a Member State.

Border control legislation includes several powers that could also be applied to address hybrid influencing that exploits migration. For example, border crossing points could be closed where necessary, and the national border could be fenced off to support situation management. The ability to request asylum does not require any particular number of border crossing points to remain open. The working group nevertheless identified several needs and opportunities for enhancing legislation.

Improved barrier device regulations would in turn enable the construction of a barrier device, such as a fence, at locations other than adjacent to border openings in return for full compensation to landowners. A need was also identified to be able to restrict or suspend rail traffic where necessary, as is already the case for waterborne transport.

The duty of private parties to assign property and provide services to the Border Guard could also be extended where this is essential for discharging the statutory functions of the Border Guard. Full compensation would be paid to the assignor. The Police Act and the Rescue Act already include similar provisions on the duty of private parties to support public authorities.

To manage the situations studied in the report, a need may arise to temporarily restrict border traffic at external border crossing points and reintroduce internal border controls. As the Chancellor of Justice has already noted, the Border Guard Act should be clarified in these respects.

Mobile phone search and location facilities would be helpful

The Border Guard Act could be amended to specify the means whereby an individual may be required to attend when investigating the conditions of entry if the investigation takes longer than 12 hours. These powers would be important for maintaining border security in the event of mass entry.

The working group also proposes further study of such measures as device searches of mobile phones. Device searches could benefit both border control and the registration and processing of asylum applications. An increasing proportion of travel documents are carried by people in electronic form only.

The working group also suggests investigating the prospects for enacting new powers of radiotechnical surveillance. This would mean a right to detect and locate devices that emit electromagnetic waves, such as mobile phones. It would nevertheless not authorise such measures as identifying the owner of the device or the contents of a communication. Radiotechnical surveillance would enable appropriate deployment of human resources in the event of mass entry.

A wide range of operational, legal, diplomatic and economic measures are deployed in response to instrumentalisation of migration. Solutions to political coercion by a foreign power exploiting migration will primarily be found through diplomatic channels, which requires cooperation at EU level and with third countries. There is nevertheless also a need for clear legislation and sufficient powers for public authorities to function proactively and effectively in the event of disruption. The working group proposes an urgent review by the competent ministries of its assessed needs for legislative amendments. The Constitution of Finland, international treaties, EU legislation and case law impose certain constraints on the measures that are available.

The Ministry of the Interior is already working on a project that seeks to assess the effectiveness of border guard legislation and prepare the required legislative amendments. These amendments will ensure that provisions remain current in evolving operating conditions, which include situations of hybrid influencing. The legislative amendment needs that are considered most urgent should be prepared with a view to submitting a Government Bill to Parliament in the autumn session of 2022.