100th anniversary of the Finnish flag 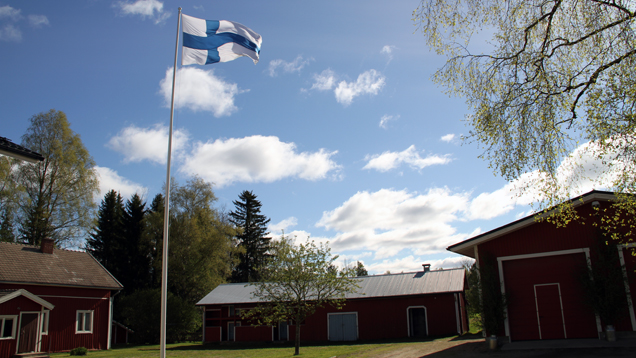 The history of the Finnish flag is an expedition into our Finnish identity and our national mindscape. One hundred years ago, the fight for our own flag had to do with the past and our right to define the essence of Finnish identity. After a long and multifaceted debate, the blue and white colours were chosen to symbolise the national identity of Finland.

The national colours of most countries are of heraldic origin. The basic rule of heraldry, or the study of coats of arms, demands that at least two colours, a dark and a light, must be used. This provides good contrast and makes the flag visible from a distance. The Finnish flag question turned into a huge dispute over colours. The colour blue had its roots in history, but the flag with a lion on a red field and the red flag featuring a yellow cross gained support particularly among Swedish-speaking members of parliament.

Debate started as early as in 1848

The debate about the Finnish flag and its colours lasted for decades. The flag of the Helsinki University Student Union depicting the coat of arms of the autonomous Grand Duchy of Finland on a white field was displayed at a student spring festival in Toukola, Helsinki, in 1848. Following this event, a lively debate about the Finnish flag ensued, especially thanks to Zachris Topelius, and during the following decades, several proposals for a Finnish flag were made.

The debate continued throughout the 1850s and 1860s, and blue and white gained support as national colours. However, the Finnish Diet never took up the matter, and the debate about different proposals was limited to newspapers, the media of the time. Nevertheless, Finns used many of the proposed flag designs at their country homes in the late 19th century, and gradually blue and white were adopted, for example, by yacht clubs for their flags and pennants.

Finland declared independence on 6 December 1917. The occasion was celebrated by flying the red-and-yellow lion flag from the Government Palace the same day. During the first months of independence in 1917–1918, it was also used as the semi-official state flag. The flag had a crimson-and-vermilion-coloured field displaying the lion depicted in the arms of Finland, the golden animal armed in silver and surrounded by rosettes of the same colour.

However, the outbreak of the Civil War in January 1918 postponed the debate. When the Civil War ended in May 1918, the red-field flag no longer seemed that appealing to the nation, or at least to those who won the War. The Civil War ended with the victory of the Whites, who celebrated the end of the War with a parade in Helsinki.

Symbolically, red has been a colour of contrasts for years. Red — symbolising the fight between good and evil, victory and blood, life and death — was later also seen in the flags of revolution, first in France and then in Russia.

Once peace was declared, the non-socialists were unsure about the colour red. The association with the Red Guard was too strong. Working-class people on the other hand saw the red-and-yellow coat of arms displaying a lion holding a sword as a symbol of the tyranny of the estates. Many of the supporters of red and yellow, which were used in the coat of arms, started to support the white-and-blue flag.

Parliament wanted to reach a quick decision on the Finnish flag. The proposal of Parliament’s Constitutional Law Committee for a white flag with a blue cross did not inspire artist and lieutenant Akseli Gallen-Kallela, who led the the Military Uniform Committee Drawing Office. While the master himself was enjoying the beauty of the countryside, artist Eero Snellman, who worked at the General Staff Drawing Office, finalised the flag design together with artist Bruno Tuukkanen and submitted the design to the Constitutional Law Committee for consideration.

In the new design, the marine blue cross was wider and the blue colour was darker. The red-and-yellow lion coat of arms was placed in the centre of the flag. After a compromise was reached on the colours, the new national symbol was ready. The white flag with a blue cross became the national flag. The red-and-yellow coat of arms placed in the middle of the cross is still featured in the state flag, the flag of the President of the Republic and the flag of the Defence Forces as a reminder of the old flag design.

The relevant report of the Constitutional Law Committee was adopted unanimously by Parliament on 28 May 1918. The bill on the Finnish flag was approved the following day when the whole Senate approved and signed the bill enacted by Parliament. Only small changes have been made to the Act on the Flag of Finland since then. The flag, however, has remained the same. The 100th anniversary of the Finnish flag is celebrated now in May 2018.

Finnish flag belongs to us all

The traditions of the Finnish flag flying culture are very young and few in number by pan-European standards. There is also a lot of cautiousness connected to flying the flag and celebrating independence. Finns respect the flag deeply and are somewhat nervous about hoisting the flag. People sometimes wonder if they dare to fly the flag or how the flag should be folded correctly.

There is no need to be nervous. Flying the flag is easy but the flag should be treated with respect. Finland is worth celebrating, and there is no better way of doing this than hoisting the Finnish flag on its 100th anniversary.

The book Siniristilippumme (‘Our blue-crossed flag’) by Caius Kajanti was used as a source for this article.